August Rosado's latest book, "The Revived Roman Empire: Why The EU Is The Embryo For The End Time Empire Of The Antichrist. $15.00 plus

New Book: Looking For The Promise Of The Blessed Hope: Why You Can Still Believe In The Rapture.

August Rosado latest book deals with the doctrine of the Rapture. Why we believe in the Rapture, is the word found in Scripture? Why the Pre-Tribulation Rapture view? These questions are answered in this book.

"Bible Eschatology Book: Looking At Geo Political Events In Light Of Biblical Prophecy" Book By August Rosado. August looks at the Geo-Political activities and ties them in to the Prophetic scenario set forth in Bible prophecy.

August Rosado deals with the key doctrinal questions concerning the gospel of Matthew and the first advent of Jesus the Messiah. He shows that the Messianic prophecies point to Jesus as the ultimate fulfillment. Though not exhaustive, the book will give you a basic overview the Messiah's first coming that will set the stage for the Messiah's second coming. $13.00 plus $3.50 S/H

The Kingdom: Now or Future?

August Rosado debunks the doctrine of "Kingdom Now or Dominion Now" Theology that teaches we are in the Kingdom age now with Jesus currently reigning on David's Throne ruling over the world. He shows this is unbiblical and that Jesus is not now reigning as King of kings and Lord of lords, but He is a King in waiting, and the Kingdom is yet to come.

NEW: August Rosado's book, "Daniel: A Chronology" looks at the apocalyptic book in chronological order rather than reading it numerically. The book serves as a commentary and you can use it for personal study or Sunday school lesson, (183 pgs). $18.00 plus $3.00 S/H

The Serpent, The Seed & The Second Coming book

There has been an on going struggle between the seed of Satan and the seed of God. Satan has tried numerous times to contaminate the bloodline in which the Messiah of Israel would come. It's been a game od chess between the God of Israel who would bring about these Messianic prophecies, and the enemy of the Jewish people who would like nothing more than to destroy the Jews and those prophecies. To eliminate Israel is to eliminate the promises of god and the return of Jesus. Satan has raised empire after empire, dictator after disctator in his quest to destroy the Jews. These empires no longer exist but the Jewish people people still remain. God has made promises to the Jewish prophets that He would preserve the Jewish people. God has preserved the Messianic bloodline in order to bring about these prophecies despite Satanic attempts to eliminate them. In this book we go to the very beginning to see how this conflict began and where it will culminate in the greatest battle of all time according to Bible prophecy. 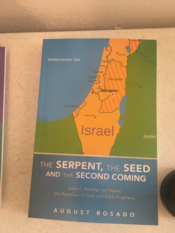 that will make a beautiful

decorative piece in your home. 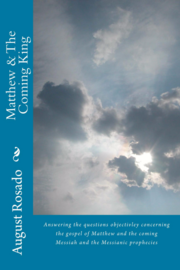